Translate this page into:

© 2022 Published by Scientific Scholar on behalf of Indian Journal of Cardiovascular Disease in Women
Licence
This is an open-access article distributed under the terms of the Creative Commons Attribution-Non Commercial-Share Alike 4.0 License, which allows others to remix, transform, and build upon the work non-commercially, as long as the author is credited and the new creations are licensed under the identical terms.

It is a Prospective interventional Pilot study with study population consisting of T2DM who are 18 years and older with HbA1C between 7.0% to 10% and LV diastolic dysfunction of at least grade 1 on resting echocardiography. Baseline diastolic function was measured. Dapagliflozin 10 mg once daily was given to all patients for 24 weeks and then left ventricular diastolic function was measured by e’, E/A ratio, E/e’ at 24 weeks from baseline as assessed by Stress Echocardiography. 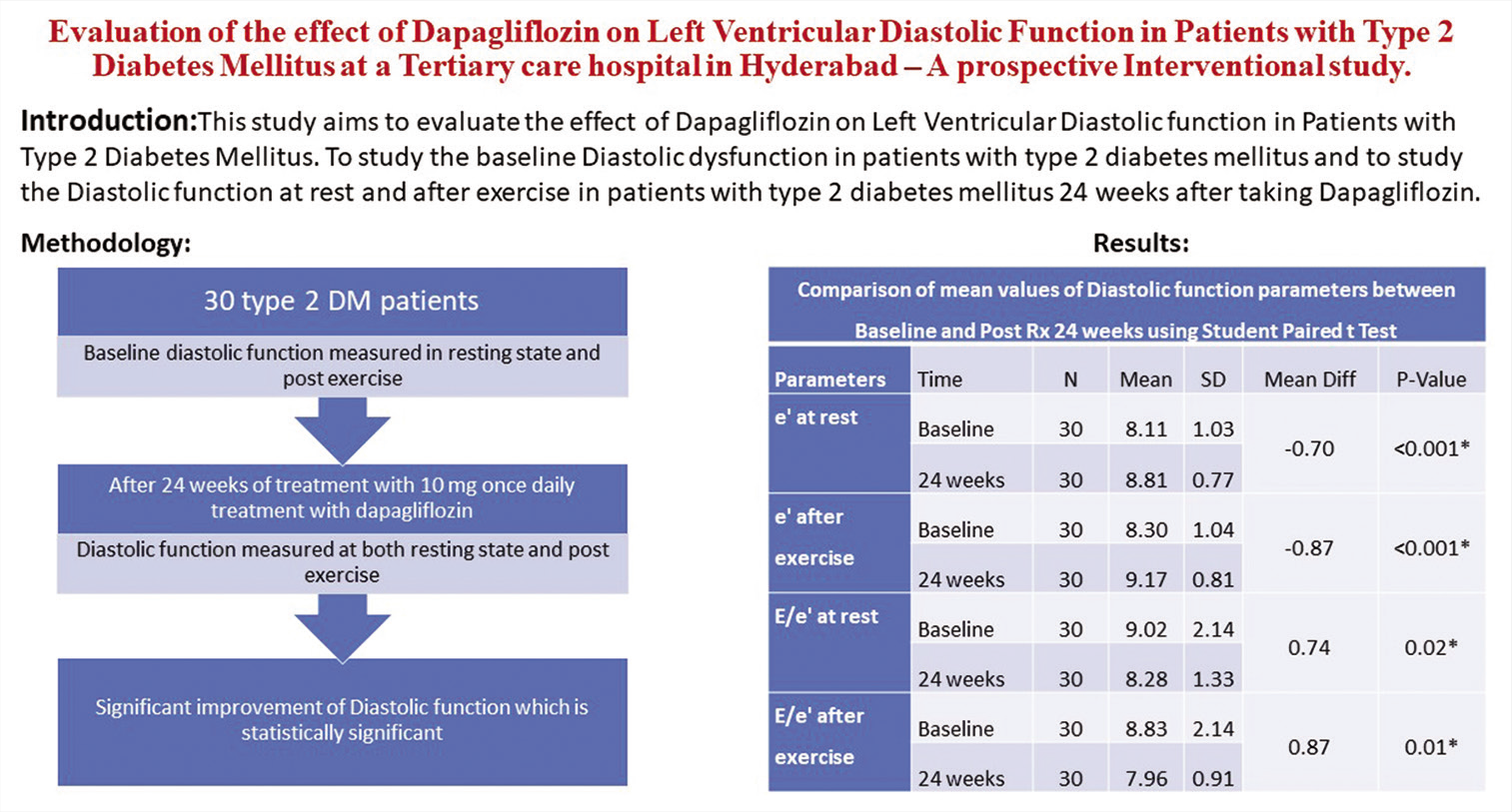 The study was done in a tertiary care center from June 2021 to November 2021 for a total duration of six months. It is a prospective interventional pilot study. The study population consists of T2DM patients presenting to the cardiology outpatient department. Patients who are 18 years and older with T2DM and glycated hemoglobin (HbA1c) of 7.0–10% with LV diastolic dysfunction of at least Grade 1 on resting echocardiography were included in the study. Patients with Type 1 DM, with a history of diabetic ketoacidosis, with a history of recurrent urinary tract infection, with renal dysfunction, patients using loop diuretics or with acute coronary syndrome, with a history of stroke within six months or with LV ejection fraction of <50% and with BMI ≥30 kg/m2, and with obstructive sleep apnea syndrome were excluded from the study. Patients satisfying the inclusion and exclusion criteria were enrolled in the study after taking a duly informed consent. Baseline diastolic function was measured in all patients enrolled in the study. Dapagliflozin 10 mg once daily was given to all patients enrolled in the study for 24 weeks and then the LV diastolic function was measured by e’, E/A ratio, and E/e’ at 24 weeks from baseline as assessed by stress echo.[4]

All the patients who qualify the inclusion and exclusion criteria were taken up for the study. Taking into consideration from the previous hospital records, around 50–60 T2DM patients visit outpatient department every day. Thirty patients were eligible for the study and these patients were followed up after 24 weeks for reassessment of diastolic function.

Limitations of the study

Sample size is small and larger sample size is needed to confirm the findings. Lack of control arm in the study is one of the limitations of the study. Comorbidities such as hypertension and obesity and other antidiabetic drugs which were taken along with dapagliflozin such as metformin and glimepiride could act as confounding factors in this study.

Patient’s consent not required as there are no patients in this study.

There are no conflicts of interest.

© Copyright 2022 – Indian Journal of Cardiovascular Disease in Women – All rights reserved.
Published by Scientific Scholar on behalf of Women in Cardiology and Related Sciences (WINCARS).

This website uses cookies to improve your experience while you navigate through the website. Out of these, the cookies that are categorized as necessary are stored on your browser as they are essential for the working of basic functionalities of the website. We also use third-party cookies that help us analyze and understand how you use this website. These cookies will be stored in your browser only with your consent. You also have the option to opt-out of these cookies. But opting out of some of these cookies may affect your browsing experience.
Necessary Always Enabled
Necessary cookies are absolutely essential for the website to function properly. This category only includes cookies that ensures basic functionalities and security features of the website. These cookies do not store any personal information.
Functional
Functional cookies help to perform certain functionalities like sharing the content of the website on social media platforms, collect feedbacks, and other third-party features.
Performance
Performance cookies are used to understand and analyze the key performance indexes of the website which helps in delivering a better user experience for the visitors.
Analytics
Analytical cookies are used to understand how visitors interact with the website. These cookies help provide information on metrics the number of visitors, bounce rate, traffic source, etc.
Advertisement
Advertisement cookies are used to provide visitors with relevant ads and marketing campaigns. These cookies track visitors across websites and collect information to provide customized ads.
Others
Other uncategorized cookies are those that are being analyzed and have not been classified into a category as yet.
SAVE & ACCEPT