Translate this page into:

© 2022 Published by Scientific Scholar on behalf of Indian Journal of Cardiovascular Disease in Women
Licence
This is an open-access article distributed under the terms of the Creative Commons Attribution-Non Commercial-Share Alike 4.0 License, which allows others to remix, transform, and build upon the work non-commercially, as long as the author is credited and the new creations are licensed under the identical terms.

1. To assess the value of baseline NTproBNP at admission and to determine the levels of serum creatinine at 48 hours and 72 hours after procedure for evidence of contrast-induced nephropathy (CIN) for patients undergoing CAG. 2. To evaluate the relationship between the values of NTproBNP and evidence of CIN.

This is an observational study performed between June 2021-November 2021 at Nizams Institute of Medical Sciences in 75 patients diagnosed with ACS. we assessed the role of nt pro bnp as a predictive biomarker for diagnosis of contrast induced nephropathy in patients of ACS undergoing coronary angiography. Serum creatinine is repeated at 48 h post procedure and compared to baseline.

Spearman’s correlation test was used to assess the correlation between NT-proBNP values and ejection fraction on the 2D echo. The rho value (-0.69) was suggestive of a strong negative correlation. P value & lt; 0.001 making it statistically significant. Simple linear regression analysis was used to predict the NT-proBNP levels by ejection fraction percentage among study patients, it showed that, for every 1% decrease in ejection fraction, the NT-proBNP levels will significantly increase by 102.90 pg/mL at P and lt; 0.001. Wilcoxon Signed Rank test was used to compare the baseline serum creatinine values with 48/72 h serum creatinine values after undergoing angiography with contrast, incidence of acute kidney injury (AKI) as shown by the resulting P value was and lt; 0.001, thus statistically significant. The ROC curve analysis to establish the association between NT-proBNP as a marker for incidence of AKI (CIN) shows shows that, NT-proBNP cut off and gt;1670 pg/mL has a sensitivity of 81.82% and specifity of 98.44% and is statistically significant with P value and lt; 0.001.

It was observed that NT-proBNP >1670 pg/mL prior to the procedure, was significantly associated with the risk of development of contrast induced nephropathy. Measurement of serum NT-proBNP pre procedure aids in identifying at risk population for developing CIN. 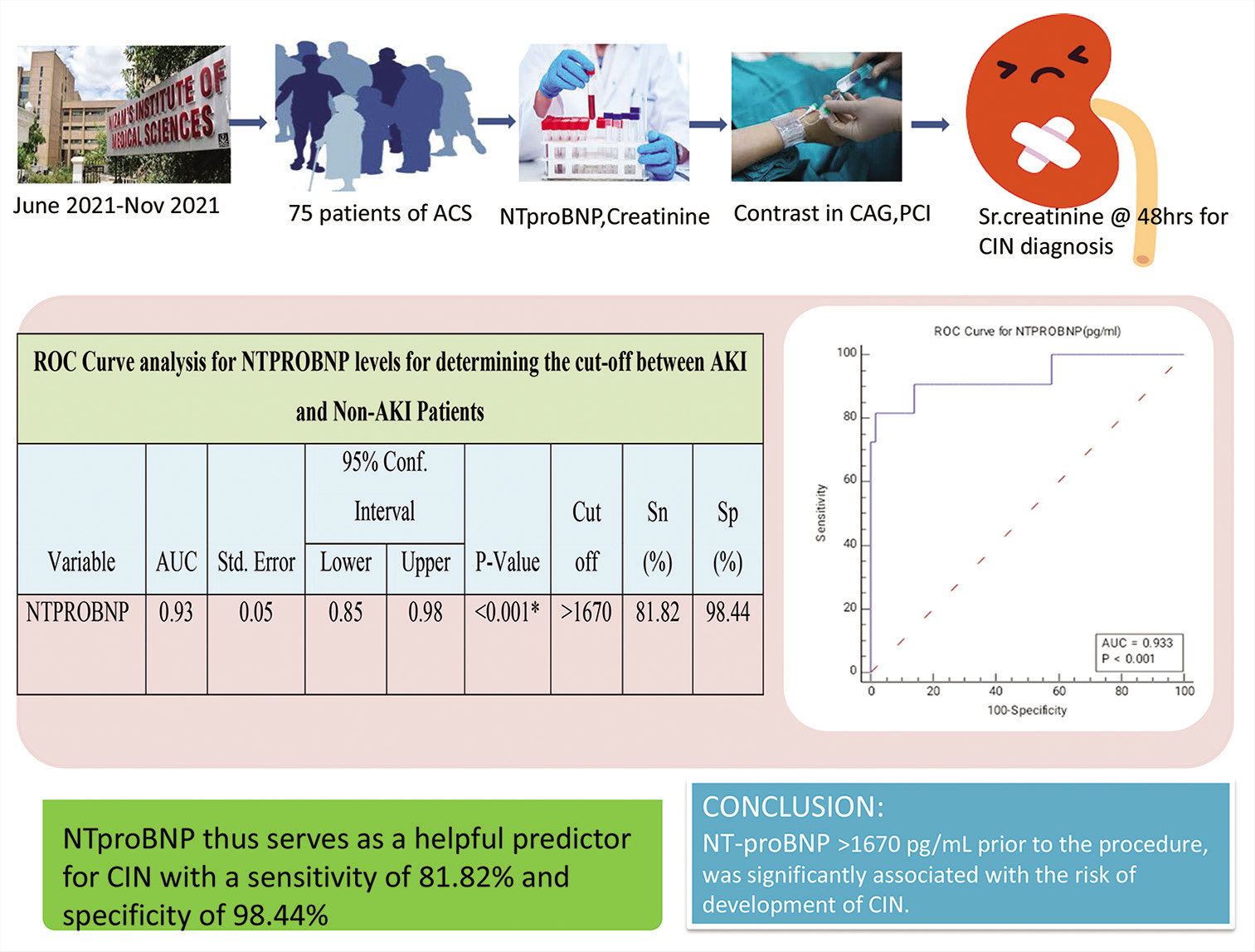 Coronary interventions require the usage of iodinated contrast, this in addition to the elderly patient population along with the procedural complexity has increased the incidence of renal dysfunction, known as contrast-induced nephropathy (CIN). The reported incidence of CIN in high-risk patients undergoing CAG lies between 10% and 20%.[1]

This increased incidence could be attributed to the patient factors including geriatric group of patients, history of diabetes and chronic kidney disease, or procedure related factors such as intra-arterial route of administration, use of high osmolar contrast agents, repeated exposure to contrast agents within 48 h, and volume of contrast used.[2] The prevention of CIN is of prime significance, with rising cases of CAGs and PCIs.

Risk-score models such as Mehran CIN score and BMC2 CIN score are being increasingly used bedside as a guide in predicting and preventing the said complication. These scores are lacking in quantitative biomarkers which predict multi-organ dysfunction. Such an objective test, in addition to these risk score models, performed at admission, before the coronary interventions would better aid in preventing CIN. N-terminal pro-brain natriuretic peptide (NT-proBNP) is one such biomarker which is easily available. It is associated with increasing age, heart failure, diabetes, renal disease, and geriatric patients which are risk factors for CIN.[5,6] There is evidence of measurement of serum BNP at admission aiding in identification of patients at risk of developing CIN after primary PCI.[7] The purpose of this study is to determine the value of baseline NT-proBNP as a predictive biomarker in development of CIN for patients undergoing CAG.

The study included 75 patients more than 20 years age admitted in NIMS cardiology department from period June 2021 to November 2021 with chest pain and established diagnosis of ACS (STEMI, NSTEMI, UNSTABLE ANGINA) not more than 2 week old. Patients with pre-existing renal disease, cardiogenic shock, acute LVF, and age >65 years were excluded from the study. Patients were enrolled in the study after admission and taking a duly informed consent. Serum creatinine and NT-proBNP levels are measured on the day of admission. Nephrotoxic drugs to be stopped on admission.

The CI-AKI is defined as a relative increase of ≥25% or absolute increase of ≥0.5 mg/dL in creatinine concentrations within 48 h after coronary angiography.

Spearman’s correlation test was used to assess the relationship between Ejection Fraction (EF) and NT-proBNP levels among study patients.

Mann–Whitney Test was used to compare the mean NTproBNP, creatinine levels at different time intervals based on presence of DM/HTN/Smoking condition among patients.

Wilcoxon Signed–Rank test was used to compare the mean creatinine levels (in mg/dl) between baseline and 48/72 h time period.

ROC curve analysis was performed for NT-proBNP levels for determining the cutoff between AKI and Non-AKI Patients. The level of significance (P-value) was set at P < 0.05.

The study is an observational prospective study involving 75 patients belonging to the age group of 57.11 ± 8.25. All patients underwent diagnostic coronary angiography. The study included 72% males and 28% females. Of the total patient population, 32% of them are diabetic (24), 20% of them hypertensive (15), and 29.3% of them smokers. Spearman’s correlation test was used to assess the correlation between NT-proBNP values and EF on the 2D echo. The rho value (−0.69) was suggestive of a strong negative correlation. P < 0.001 making it statistically significant [Table 1].

When simple linear regression analysis was used to predict the NT-proBNP levels by EF percentage among study patients, it showed that, for every 1% decrease in Ejection Fraction, the NT-proBNP levels will significantly increase by 102.90 pg/ml at P < 0.001 and this is accounted by 31% variation in ECHO and EF [Table 2].

Mann–Whitney test was used to compare the risk factors such as diabetes, smoking, hypertension and its probable association with the serum NT-proBNP values in our study and to verify if they contribute as confounding factors. However, the results show P value as not significant [Figure 1].

Thus, high values of NT-proBNP serve as a predictor and help in practicing target-guided adequate measures to prevent CIN, in the form of regulating contrast volume, drugs such as N-acetyl-cysteine, and hydration in the predicted at risk patient population [Figure 2].

Contrast volume used was 80 ml in approximately 53.3% of patient population and 60 ml in 36%. When Wilcoxon Signed–Rank test was used to compare the baseline serum creatinine values with 48/72 h serum creatinine values after undergoing angiography with contrast, incidence of AKI as shown by the resulting P value was < 0.001, thus statistically significant [Table 3].

The ROC curve analysis to establish the association between NT-proBNP as a marker for incidence of AKI (CIN) shows that, NT-proBNP cutoff >1670 pg/ml has a sensitivity of 81.82% and specify of 98.44% and is statistically significant with P value < 0.001 [Table 4 and Figure 3].

NT-proBNP is a neurohormone secreted in response to increased intracardiac volume and pressures, from the myocardium. It is an established biomarker for the left ventricular dysfunction. Mann–Whitney test was used to compare risk factors such as diabetes, hypertension, smoking, and its association with the serum NT-proBNP values in our study and to verify if they contribute as confounding factors. However, the results show p value as not significant. Similar results were found in the study by Liu et al., where contrast volume to creatinine clearance ratio was evaluated and compared to CIN incidence in patients undergoing PCI[6]

Serum creatinine levels, at both baseline and at 48/72 h when compared in the patient population with comorbidities like diabetes and hypertension and risk factor like smoking has shown to be statistically not significant as indicated by the p value obtained from the mann whitney test. The present study showed a significant association between the high values of NT-proBNP with an increased risk of CIN. Baseline NT-proBNP (before procedure) value of more than 1670 pg/mL, the cutoff value, was a strong and independent predictor of CIN.

A similar study was performed in patients undergoing cardiac surgeries; pre-operative NT-proBNP and its relation with development of post-operative AKI were assessed. In this study by Wang et al., it was observed that post-operative AKI occurred in (34.0%) patients, with Stage 2 AKI in (3.4%) patients, Stage 3 AKI in (1.3%) patients, and new-onset dialysis was required in (0.7%) patients.[7]

The NT-proBNP concentrations were significantly correlated with all the stages of AKI (P < 0.01). Including NT-proBNP in pre-operative assessment has substantially improved in predicting post-operative AKI.[7]

Another study by Jarai et al., including a total of 979 patients of ST-segment–elevation myocardial infarction that was enrolled in the Harmonizing Outcomes with Revascularization and Stents in Acute Myocardial Infarction trial, also had compared the BNP levels done before primary percutaneous coronary intervention in predicting postoperative incidence of CI-AKI.[8]

The reason for this association is unclear; however, the potential mechanisms by which elevated NT-proBNP values were associated with incidence of AKI/CIN are hypothesized as follows:

Recent studies focus on the inflammatory markers and its role in predicting the link between cardiac and renal diseases. The natriuretic peptides are established biomarkers in heart failure and since increased levels can be seen in renal impairment and heart failure, they probably also reflect renal injury.[14]

Thus, this biomarker useful in predicting both cardiac and renal impairment has the potential as a valuable diagnostic tool.

NT-proBNP >1670 pg/mL before the procedure was significantly associated with the risk of development of CIN. Measurement of serum NT-proBNP pre-procedure (coronary angiography) aids in identifying and predicting at risk population for developing AKI/CIN. NT-proBNP value pre procedure serves as a biomarker in predicting risk of development of CIN. We can practice target guided adequate measures (such as, hydration, decreasing contrast volume used and n-acetylcysteine injection) to prevent CIN in such patients with high ntprobnp values.

Patient’s consent not required as there are no patients in this study.

There are no conflicts of interest.

© Copyright 2022 – Indian Journal of Cardiovascular Disease in Women – All rights reserved.
Published by Scientific Scholar on behalf of Women in Cardiology and Related Sciences (WINCARS).

This website uses cookies to improve your experience while you navigate through the website. Out of these, the cookies that are categorized as necessary are stored on your browser as they are essential for the working of basic functionalities of the website. We also use third-party cookies that help us analyze and understand how you use this website. These cookies will be stored in your browser only with your consent. You also have the option to opt-out of these cookies. But opting out of some of these cookies may affect your browsing experience.
Necessary Always Enabled
Necessary cookies are absolutely essential for the website to function properly. This category only includes cookies that ensures basic functionalities and security features of the website. These cookies do not store any personal information.
Functional
Functional cookies help to perform certain functionalities like sharing the content of the website on social media platforms, collect feedbacks, and other third-party features.
Performance
Performance cookies are used to understand and analyze the key performance indexes of the website which helps in delivering a better user experience for the visitors.
Analytics
Analytical cookies are used to understand how visitors interact with the website. These cookies help provide information on metrics the number of visitors, bounce rate, traffic source, etc.
Advertisement
Advertisement cookies are used to provide visitors with relevant ads and marketing campaigns. These cookies track visitors across websites and collect information to provide customized ads.
Others
Other uncategorized cookies are those that are being analyzed and have not been classified into a category as yet.
SAVE & ACCEPT